Dholera Smart City will emerge as a “Global Manufacturing and Trading Hub” over the next few years as the city will be the largest node and the first Greenfield industrial smart city in the country. It will have state-of-the-art utilities, logistic and social infrastructure including education, healthcare, other public amenities, and much more. Dholera Project will have its own Self-Sustaining Eco System consisting of economic drivers through industrialization, utility & logistic infrastructure.

Dholera Smart City will emerge as a “Global Manufacturing and Trading Hub” over the next few years as the city will be the largest node and the first Greenfield industrial smart city in the country. It will have state-of-the-art utilities, logistic and social infrastructure including education, healthcare, other public amenities, and much more. Dholera Project will have its own Self-Sustaining Eco System consisting of economic drivers through industrialization, utility & logistic infrastructure. 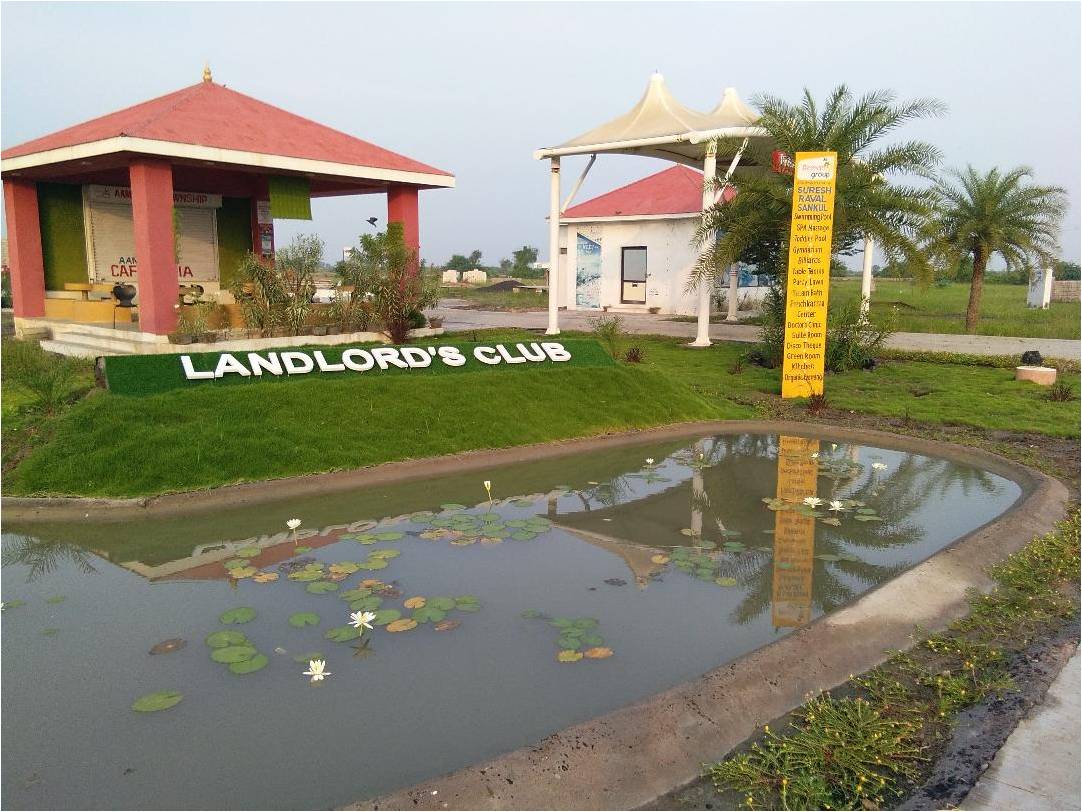 In terms of planning, the distribution of open green spaces & social infrastructure builds upon the core strategy of creating a Green city for the people. Based on this strategy the guiding principle of Live – Work – Play is adopted.

Dholera SIR with its world-class ICT-enabled infrastructure provides an integrated approach to urban development which can go a long way in contributing to the building of a smart and sustainable city. Likewise, the ABCD Building at the heart of Dholera City is operational with the Business & Exhibition center, the administrative building is housing the City Civic Center, ICT Command Control Room, etc. Technologies like these can help businesses maintain their operations in times like the COVID 19 pandemic.

Many more cities like Lavasa in Maharashtra and Amravati in Andhra Pradesh have also come up with the same idea of Greenfield smart cities in those states but failed due to being only residential cities whereas Dholera SIR is an industrial city where there will be a balance between good living and jobs in the vicinity. The industry will need people to run it and people will need good living with a pinch of rural life and facilities of a city at the same place. So, the success is with Dholera Project and its going to rein for the next few decades in development and job creation.

Giants who have already started in Dholera SIR:

To ease the business needs of the client, soil filling is done in 2 major industrial plots. Currently, the land is being allotted to Tata Chemicals Ltd. (126 Acres) for their upcoming lithium-ion-based battery for Electric Vehicles. ReNew Power Private Limited is to set up a manufacturing facility for their photo Voltic panels for solar energy (100 Acres), Torrent Power Ltd. (6 Acres), Chiripal limited (90 Acres), and HPCL (3 Acres) are the companies already made their presence at India’s first Industrial smart city.

Various categories of roads ranging from 18m ROW to 70m ROW are constructed for the efficient circulation/movement of people and goods for the Activation Area. The design and construction of roads is benchmarked against international standards. The entire road network spread across the activation are of 22.54 sq. km is around 85 km. The use of the latest design software, 3D modeling for design, and the latest construction methodologies are used to achieve the efficiency of these networks. Services and utilities running within the road reserves include stormwater drainage, water supply, sewerage, power, telecommunications, and gas. 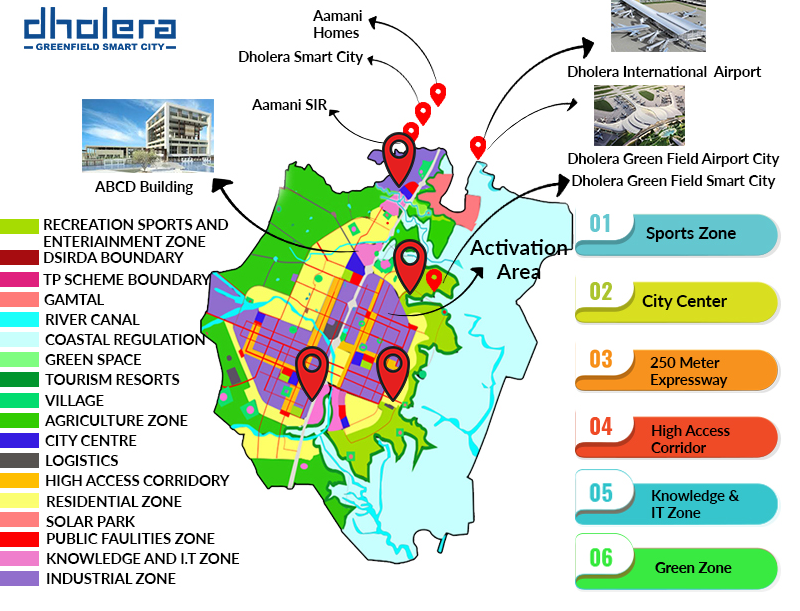 Since it’s an eco-friendly city, it will run on a 5000 MW Dholera Solar Park being developed in two phases in Dholera Special Investment Region. Out of which 500 MW solar park is ready to run a Greenfield city coming up approximately 70 km away from Ahmedabad, Gujarat, India. More than 11,000 ha of land is identified for the development of this solar park which is owned by the Government of Gujarat. The construction of this massive 5000 MW solar park will attract an investment of close to about `25,000 Cr. which will generate employment for more than 20,000 people. 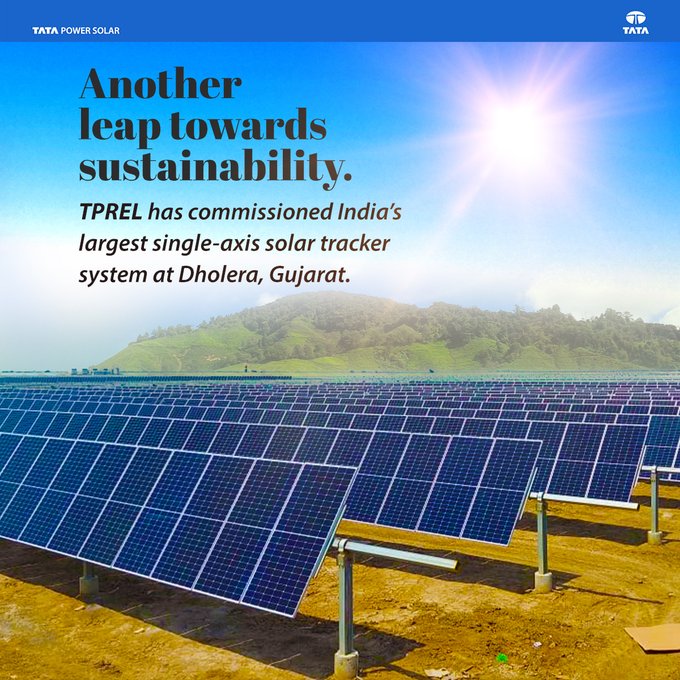 110 mt wide, 15 KM long and 15-meter deep creek around the activation area will work as a water harvesting device and water reservoir for the city to keep it cooler by a few celcious. This is the first of its kind in the country, part of this is already developed.

The Mass Rapid Transit System (MRTS) between Ahmedabad and Dholera is part of the plan to develop a self-sustained rail-based transportation system in order to provide connectivity both within Dholera and between Dholera and Ahmedabad for the movement of people.

To provide air connectivity to Dholera Special Investment Region (DSIR) an upcoming International Airport 15 km from the proposed activation area is being developed in an area of 1426 hectares of land. Airports Authority of India (AAI) has prepared the Feasibility Report and all necessary permission has already been obtained. The Dholera International Airport is envisaged to cater DSIR & its hinterland and traffic overflow from Ahmedabad International Airport.

The airport is slated to have two runways capable of handling wide-bodied long-haul aircrafts such as the A380. Work on Dholera International Airport to start soon. The Airports Authority of India has issued a tender for the first phase of the project which includes the runway, taxiway, apron, etc. The `986.61 crore project will be executed on a public-private partnership basis and will be completed in 3 years.

Gandhinagar: Even as the state government looks to showcase the Dholera Special Investment Region (SIR) as a world-class plug-and-play Greenfield industrial smart city at the coming Vibrant Gujarat Global Summit (VGGS), the chief minister visited the SIR a few days back to review the progress of various works there.

Bhupendra Patel said Dholera SIR Project has huge potential for sectors such as aerospace, defense, engineering, pharmaceuticals, IT, agro and food processing, and renewables. He urged entrepreneurs to invest in the SIR, which is spread over 920 square kilometers. “Dholera SIR is not just about industries, as we have also planned to develop a Special Education Region over 1,000 acres here. An international airport is also coming up over 1,425 hectares and the Airports Authority of India has already started work on it,” the chief minister said.