WHAT IS DHOLERA SIR?

The Dholera Special Investment Region Development Authority (DSIRDA) has the responsibility of planning and development of DSIR and will encompass the function of administering government land within DSIR. An SPV named Dholera Industrial City Development Limited (DICDL) has been created between the Central Government (DMICDC Trust) and the State Government (DSIRDA) of Gujarat to implement the project. Delhi Mumbai Industrial Corridor Development Corporation Limited (DMICDC), a special purpose company, was incorporated to establish, promote and facilitate development of the DMIC Project.

Spanning approximately 920 sq km, encompassing 22 villages of the Dholera Taluka in the District of Ahmedabad, is envisaged to be bigger than the city of Ahmedabad. It is strategically located between the industrial cities of Ahmedabad, Baroda, Rajkot and Bhavnagar.

Dholera Industrial City will have its own self-sustaining eco-system consisting of economic drivers through industrialisation, utility & logistic infrastructure, Social Infrastructure including education, healthcare and other public amenities.

DMICDC, with the support of the Government of Gujarat, plans to create an economically and socially balanced new-age city with world-class infrastructure and highest quality-of-life standards with sustainability in the urban form including a sustainable urban transportation system within and mobile/efficient regional connectivity with neighbouring cities and the rest of the country.

It will be connected with Ahmedabad by a 6-lane access controlled expressway & MRTS (Metro Rail) in one common corridor providing seamless connectivity & Rail-Road transition as an effective means of transportation between the 2 cities.

An international airport is being developed to the North-East of DSIR by an SPV called Dholera International Airport Company Limited (DIACL). The airport has already received Environmental & Site clearance.

Defence, Aviation, Electronics, High-Tech emerging technologies, Pharmaceuticals & Biotechnology, Heavy engineering, Auto & Auto ancillary, General Manufacturing, Agro & Food processing, Metals & Metallurgical products, etc. are the sectors identified with a high potential for Dholera Industrial City among other sectors. DSIR will be home to non-polluting industries, promoting a clean, green and sustainable urban development, which can contribute to the growth of the region and India.

The Government of Gujarat and DSIRDA has adopted the mechanism of Town Planning Schemes (TPS) to ensure the delivery of serviced land that can benefit the local population and the private sector. TP schemes are being implemented under the Gujarat Town Planning and Urban Development Act, 1976 (GTPUD). The developable area in DSIR is divided into six (6) Town Planning (TP) Schemes and all 6 draft schemes have been sanctioned. Town Planning Schemes 1 and 2 cover the development in Phase-I. TP 1 are spread over approximately 51 sq km or 12750 acres & TP 2 over 102 sq km or 25000 acres.

TP 1 will have approximately 186 km of road & TP 2, 340 km. Right of Way (ROW) varies from 12 m to 70 m i.e. 2 to 6 lane roads, have been master planned. Services and utilities running parallel to the roads & within the ROW will include Storm water drainage, Water supply, Sewerage/waste Water, Recycled Water, Power, Telecom and PNG.

The Development Plan for DSIR has been prepared and sanctioned by DSIRDA. Phase-I constitutes TP1 and TP2 covering 153 sq km.

Apart from urban development, overall trunk and external infrastructure will be developed to support the development at DSIR. These include the following:

Dholera Industrial City is envisaged to be a world-class destination with excellent infrastructure. The city will provide opportunities for the setting up of manufacturing units, which will in turn help in increasing the industrial output of the country and create jobs (800,000+). All of this, while aiming to provide an environment to work, live, learn and play. Dholera SIR is a planned smart, sustainable community, which will be the role model for future cities in India. The Sanctioned Development Plan of Dholera Industrial City comprises of a total land area of 920 sq km.

The 920 sq km of the Dholera Industrial City area has a total developable area of about 580 sq km since one third of the area falls within the Coastal Regulation Zone (CRZ) boundary where development is restricted and is as per CRZ norms. Out of the 580 sq km the prime agricultural land has been preserved and a total area of about 422 sq km has been set for urban development, which has been translated into six town-planning schemes and will be developed in three phases over a period of 30 years. 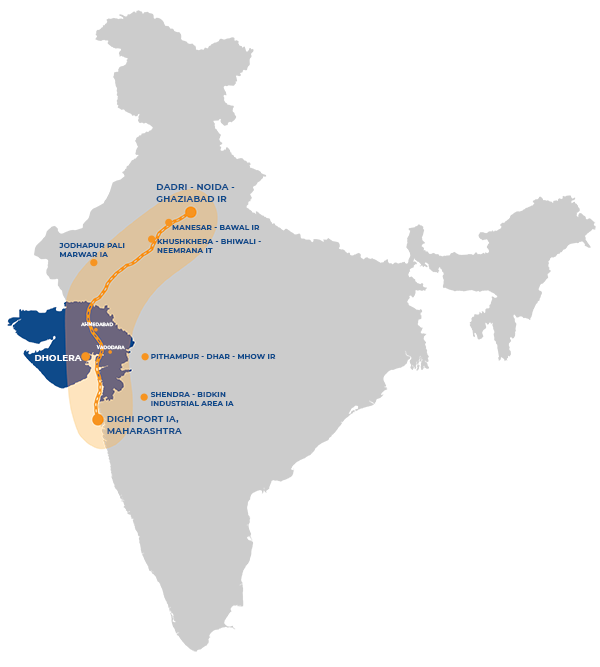 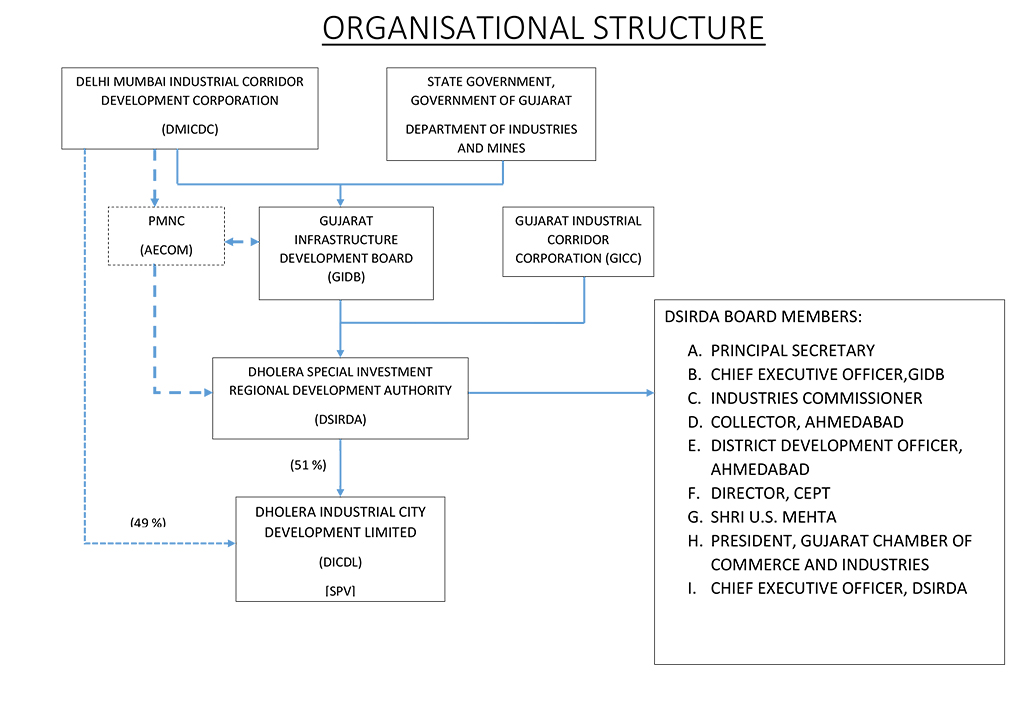 Aamani Spaces Ltd., a public limited company incorporated under the Companies Act, 1956 and one of the branches of the prestigious Aamani Group, is solely dedicated to fulfill the aspiration of people wishing to own their dream home complete with modern amenities and surrounded by a natural and peaceful environment.

We create spaces where life nourishes & special moments are carved with the help of a team equipped with world class expertise and motivated by our pledge to deliver more than the expectations of our customers.

Aamani – The word means “Spring “in Sanskrit. True to its name, the company founded by Mr. Himanshu Sampat, a great visionary, signifies a refreshing change in the world of real estate with transparency & professionalism matching the best practices of management.

The state government has enacted a legal framework for the SIR – The Gujarat Special Investment Region Act – 2009. It has come into effect from 6th January, 2009. This shows the commitment of the Government to set up world-class hubs of economic activity on the lines of fastest growing countries of the world.
The SIR Act, inter alia, provides for following matters :

The Delhi-Mumbai Industrial Corridor Development Corporation (DMICDC) is a planned industrial development project between India’s capital – Delhi and its financial hub – Mumbai. It is one of the world’s largest infrastructure projects with an estimated investment of USD 90 billion and is planned as a high-tech industrial zone spread across six states, over a 1,500 km long Western Dedicated Freight Corridor which serves as its backbone.

Development plan aims at the creation of an economically and socially balanced, new age city with world class infrastructure and high quality of life. Adoption of sustainable approach across key components such as transportation, waste recycling, overall urban form and resource efficiency from the cornerstones of this plan.

The developmental planning for DMIC aims to achieve certain end results with implementation that would ensure realisation of an envisaged vision for the project, leading to economic development.

Accordingly, the project goals for DMIC are:

Government of India has incorporated a special purpose vehicle, Delhi Mumbai Industrial Corridor Development Corporation (DMICDC), specially envisaged to coordinate DMIC Project Development, Finance and Implementation, headed by a full time Chairman and Directors and having representation from the Government of India and Financial Institutions.

An apex authority has been constituted under the chairmanship of Union Finance Minister with concerned Central Ministers and Chief Ministers of respective DMIC States as members to provide overall guidance for planning and issue necessary approvals.

DMICDC will undertake project development activity for various central government projects and also help in assisting state governments. DMICDC will be responsible for assisting state governments to raise finances on the basis of a sovereign guarantee. The corporate entity will have a shell structure with 49% contribution by GOI and the remaining by Financial Institutions and other infrastructure organizations.

DMICDC will also act as a pass-through entity for specific projects and raise a Project Development Fund (PDF) from GOI, GOJ and FIIs. The PDF is proposed to be used as a revolving fund, specifically for undertaking project development activities (e.g. DPR preparation etc.) and shall be recovered from the successful bidders. This fund will also ensure availability of uninterrupted funds for various preparatory activities. The designatories of respective State Governments and the DFC implementing agency could be represented as Directors on the Board of DMICDC.

It is envisaged that funding for DMIC project could be either through nodal agencies (budgetary/extra budgetary provisions) or through Viability Gap Funding/Long term soft loans extended to the Project SPVs. DMICDC would facilitate this process by using a sovereign guarantee provided by the Central government. Moreover, the SPVs could also borrow on their own balance sheets or project recourse basis.

Gujarat Infrastructure Development Board (GIDB) headed by the Hon. Chief Minister of Gujarat will be the Apex Authority. GIDB will delegate powers and functions to its Executive Committee headed by Hon. MOS (Ind). Core functions of the Apex authority like approvals & modifications in development plan, town planning schemes and general regulations shall not be delegated to any committees.

Powers and functions of the Apex Authority

DICDL has been formed with an initial capital of INR6,000 crore out of which approximately INR 900 crore has already been released by the DMIC Trust against equity contribution for Activation Area work. The equity on part of the Government of Gujarat through DSIRDA is in form of land, which is allocated to SPV DICDL. The DMIC trust has already approved the activation trunk infrastructure project of INR 4,400 Crores.

Gujarat has a strategic location – it is well connected to the major cities of the world, both by air and sea routes. The state has direct international flight connectivity to cities across Europe, Middle East, East Asia and America. Gujarat has a coastline of 1,600 km with 42 ports that connect to major sea-based trade routes and trade centres like Middle East, West Europe, Asia and upcoming destinations on the African Continent. The state also acts as a gateway to landlocked states of India connecting to them by road, rail and air thereby boosting their trading opportunities.