India Builds Its Own 'Google Maps' : All You Need to Know

The projects in this scheme will be scrutinised under three layers

Back in 2012, there were talks to bring about the Dholera Smart City project in Gujarat. However, there was no railway station within 40 km of the area. To overcome the issue, a digital map of Dholera and the surrounding area.

Many a time, we have seen newly constructed roads dug up to include new pipelines. One reason for this is the lack of centralised information which can guide these projects so that we can include the pipelines when roads are constructed to start with. Another common issue is a delay in centralised infrastructure projects, in addition to road construction. The Indian Government has come up with a new digital tool to tackle these issues, which is informally called ‘India's Google Map Infrastructure Development'. In more formal terms, it is PM Gati Shakti National Master Plan For Connectivity, which is a digital tool that will help the government overcome these issues.

How did this project materialise?

Back in 2012, there were talks to bring about the Dholera Smart City project in Gujarat. However, there was no railway station within 40 km of the area. To overcome the issue, a digital map of Dholera and the surrounding area was created to get an overview of the area, following which a railway line was created. However, other issues like the lack of pipelines, and sewer lines have multiplied the infrastructure cost. The Dholera project became the first to recognise this issue and come up with a special purpose vehicle (SPV) along with National Industrial Corridor Development Corporation (NICDC) Trust. This entire episode served as a trigger point for what is now PM Gati Shakti National Master Plan.

It is a map-based infrastructure of the government of India launched in 2021. It offers a dashboard with a bird's eye view of tunnels, roads, pipelines, bridges, forests, transmission cables, and airports across the country. It is like a Google maps software for Indian infrastructure. It will help in planning and execution of complex projects, and has been developed by the Bhaskaracharya National Institute for Space Applications and Geo-informatics (BISAG-N). The agenda is overcome delay of 1390 mega infrastructure projects. 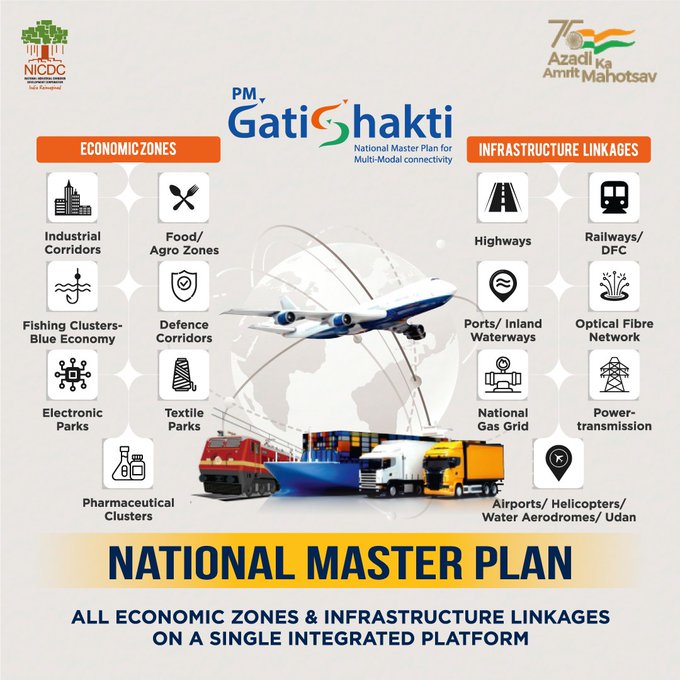 As of today, Gati Shakti has 2000 layers of information and is growing by the minute as more and more central and state bodies are feeding into the platform. This is helping our infrastructural decision-making. Indian projects are laden with delay, which can now be centralised. Kerala state government is one of the early users of this scheme. The projects in this scheme will be scrutinised under three layers:

1. Technical Support Unit, which is at the lowest level

2. National Planning Group (NPG), which takes care of any discrepancies and issues there might be.

3. Empowered Group Of Secretaries, which is at the highest level and takes care of any remaining discrepancies or escalated issues.

The central government is incentivising more agencies to utilise this platform in addition to all states and union territories, including 23 central ministries which are already on board. However, the government also has to be wary if sensitive information as cyber hacking is rampant. Additionally, there is a dearth of digitised land records, and land use has always been the Achilles heel for independent India. Lastly, Indian schemes require heavy execution, which is something we are yet to accomplish efficiently.